How to get and get rid of good startup ideas? 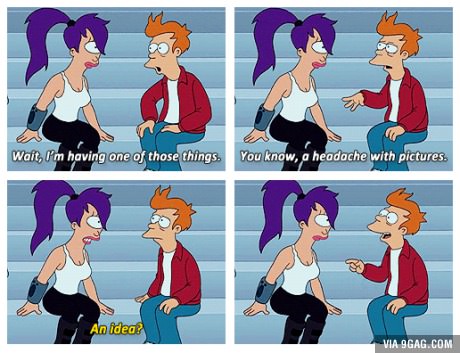 So this morning I had my friend Peppe visiting me for Saturday morning brunch. Peppe said he had recently read about a fashion startup called Fashism (fashism, like fashion, get it?). I remembered some folks I know who were doing something similar in a Garage48 event and a while ago something of the kind raised some funding.

They say ideas are cheap (dime a dozen), but it sure feels expensive to get one. Lately I feel as if I had much better ideas before I joined the whole startup race. For example Chief Financial Wizard is based on an idea I first had years ago. Somehow all the new ideas only seem to be solving first world problems.

So, a bit later I was scrolling my Facebook feed and found two separate posts about people asking if anyone is travelling from x to y and could take a little package with them. Posts like this really seem to be trending lately in my feed.

Naturally, I thought that could be a nice startup – deliver goods for money if you are taking the road anyway. Like Uber for cargo delivery. I got really excited about the idea. C’mon! It’s my first shared economy idea for years! Somehow I found it really difficult not to think about it. Glimpses of the product already flashing in my head, I started jolting down fragments of ideas. The more I wrote the more excited I got – monetization is really easy for an idea like this one.

While a part of me got worried about wasting my weekend being excited over a startup instead of resting, the other side of me could already imagine Rocket Internet copying the idea.

I’ve found googling my ideas to be as as hard as showing the designs of my future product to potential future customers. Somehow I’d really want to delay the reality in these cases, to be right without asking anyone’s oppinion. But it helps.

About half an hour into the startup I managed to write the first description down and googled it. And found Anyvan, doing something similar already. In addition to the fact that they stole my idea before I had it, I actually think their name is really nice. It must also be a fairly old startup since it ends with .com.

Anyway, this helped! Now that I know it exists, I feel more easygoing about the idea and can once again start enjoying my Saturday.